Visit the miraculous icon of Virgin Mary in the incredible neoclassical Panagia Trypiti church and wash your hands in the Agiasma fountain.

The church of Panagia Trypiti is perched on the top of a 30m rock boasting over the beach of Aigio. Panagia Trypiti (Zoodohos Pigi) is the patron saint of Aigio. In the church there is the miraculous icon of Panagia Zoodohos Pigi which was found, according to tradition, in a crevice (trypa in Greek), hence the name Trypiti. The castaway who found the icon was the first ascetic servant of Panagia (Holy Mother) and a monastery was built to house the icon. The actual structure of the church was completed in the 19th century and in 1870 the architect Angelos Koryzis built its renaissance marble staircase.

The visitor through a cypress grove ascends the 150 steps that lead to the church and the miraculous icon. Many pilgrims ascend the steps genuflected. The church is a two-storey building of neoclassical architecture surrounded by beautiful gardens. In the inner portico there is a marble fountain called Agiasma (holy water). Above the fountain a palindrome reminds the believers “wash your sins, not only your face”. The church is decorated with 19th century sacred paintings and wooden carved decorations. On the right there is the miraculous icon placed in a little cave, once the secluded place of the first ascetic castaway, who found the icon.

The church is famous all over Greece and on Good Friday there is a procession of the holy icon in the city of Aigio. 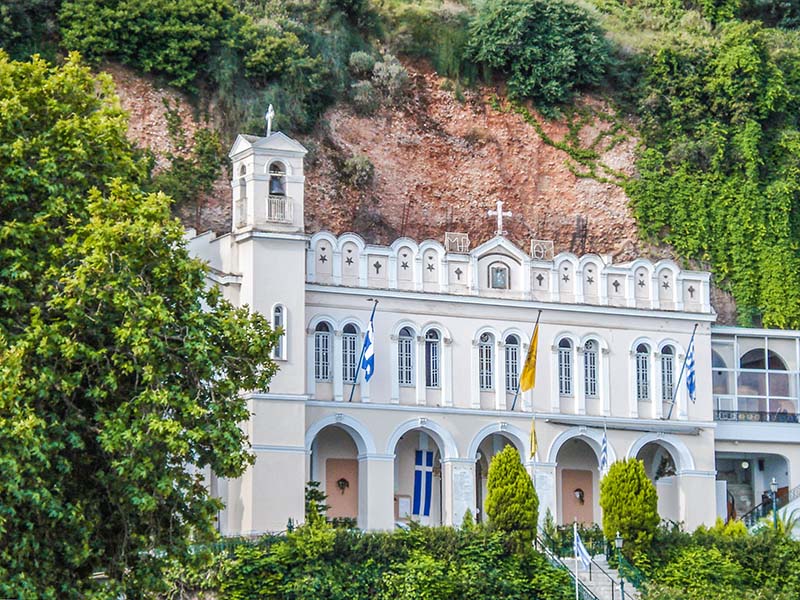