A seductive coastal town renowned for its therapeutic baths, its casinos and its beautiful beaches.

Loutraki is a coastal town of 11,500 inhabitants 8km northeast of Corinth and 81km west of Athens, renowned for its thermal baths since the Antiquity. Loutraki was called Thermae (hot springs) and Thermia Artemis was its protective Goddess. Destroyed completely in a 1928 strong earthquake, Loutraki was rebuilt using earthquake resistant techniques. Thus, it suffered minor damages in the earthquake of 1981. Loutraki is a cosmopolitan tourist destination, not only for its thermal baths (declared a spa town in 1925) but also for its beautiful beach, the casino and the sights near the city. In mount Geraneia, you will find the Osios Patapios monastery, founded in 1925 where once was a hermitage of the 12th century. It contains the sacred relics of Osios Patapios and the skull of Saint Hypomone (Saint Patience), the empress Helena, mother of Constantinos Palaiologos, the last Emperor of Byzantium. Later in life she became a nun. The view from the monastery is exquisite. You can see the Isthmus and the Corinthian gulf.

The church of Agios Andreas, built in the 14th century by Ioannis Kantakouzenos, is very close to the spas. The lagoon of Vouliagmeni and the Corinth Canal are near too. Interesting enough is the archeological site of Perachora with its antiquities.

In the city there are many listed edifices, built in the beginning of the 20th century. The city of Loutraki is fronted by an incredible cosmopolitan beach with cafes, restaurants, taverns and many stately hotels. The inhabitants have founded many cultural and athletic associations and every year they organize events, ecological escapades and various actions. Panagia Giatrissa (Holy Mother of God the healer) is the patron saint of the town that is celebrated every year with a grand fete on September 8. 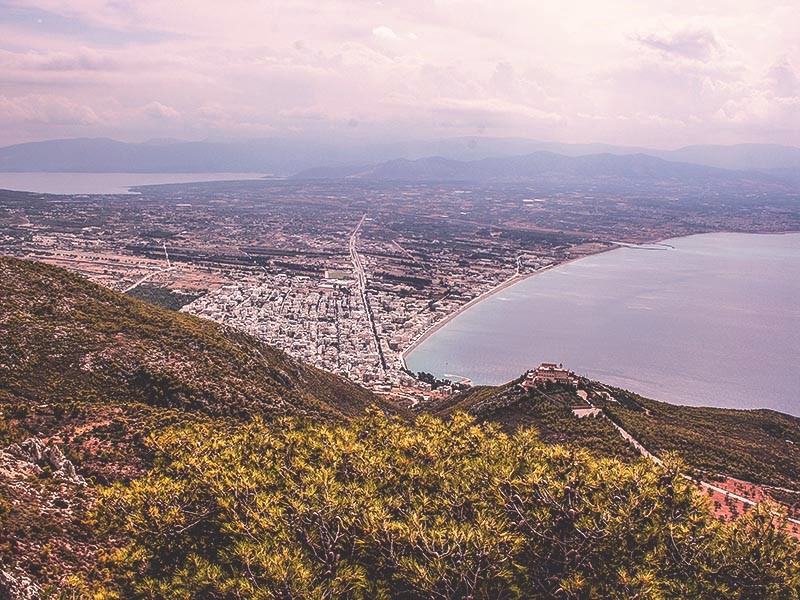