A monastery that was destroyed and restored many times, it houses priceless artifacts and heirlooms.

The Monastery of Agia Lavra is located in the municipality of Kalavryta, of the Achaia Region, approximately 5 kilometers southwest of Kalavryta. It is built on a height on the foothills of mount Velias, at an altitude of 933 meters above sea level.

It was built in 961 AD, at a different location than its current one, at "Palaiomonastiro" (meaning "old monastery"), by the monk Eugenios ("kind one", "noble one"). The old katholikon, which is preserved in its original location, was dug into the entrance of a cave. It is a two-aisled church, and it's roof is cross-shaped. It was destroyed and deserted in 1585, and in 1689 it was restored, built again in its current location. The new katholikon was three-niched, one-isled, of Athos style ("agioreitiko"), it had an unsupported dome, and was destroyed in 1826 by the armies of Ibrahim Pasha. The third katholikon, which was newly renovated in 1826, with a Byzantine-style dome ("Vasiliki Me Troulo"). The monastery, however, was struck by an earthquake in 1844, once again becoming deserted, and was then populated again in 1850. It was ultimately destroyed by the Nazi forces in 1943, and was brought to its current form in 1950.

The monastery hosts many historical treasures, like an Epitaph that was hand-woven in Smyrni, a Gospel gifted by Catherine the Great, and the gold-woven vestments of Germanos III of Old Patras. It also contains a grand library, which has over 3000 volumes, of which many are centuries-old (the oldest volume being dated to as far as 1502). By far the most important treasure of the monastery is the Banner of the Revolution of 1821, which was hoisted on top of the monastery by Germanos III on the 25th of March, 1821. It is known that the legend of the official starting of the Greek Revolution was written in the monastery of Kalavryta, where the warlords received the blessing of Germanos III. The banner is, to this day, a priceless treasure decorating the monastery, and it is also a rare heirloom of great importance to the Greek nation.

The monastery celebrates every 15th of August. 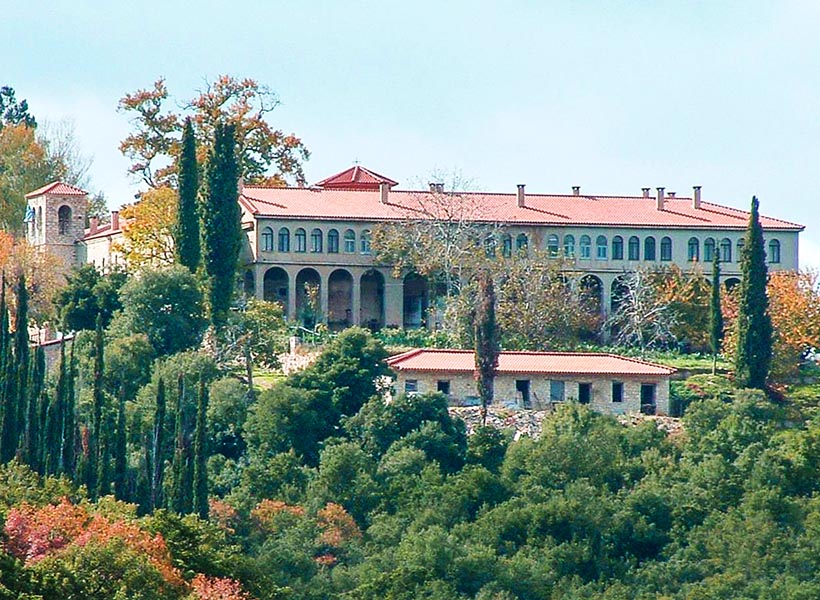