One of the oldest, if not the oldest, monastery of Greece. It has a long history and a miraculous image made by Apostle Luke, as well as a library.

The Monastery of Megalo Spilaio (Great Cave) is in the Kalavryta municipality of Achaea region, about 11 kilometres northeast of the city of Kalavryta. It is built on an alitutde of 940 metres, inside a natural cave of the Chelmos mountain.

It is one of the oldest monasteries of Greece, if not the oldest. It was built in 362 by two brother monks, Symeon and Theodore, and is dedicated to Panagia (the Mother of God). It hosts an icon of Panagia, said to be miraculous, called “Panagia Megalospilaiotissa”, of the Great Cave.

The monastery saw great growth during the Byzantine period, gathering dependencies and huge wealth and properties in Achaea and Elis, but also in Constantinople and Asia Minor. It was destroyed four times by fires and rebuilt each time. The fires destroyed several relics, but the miraculous image was saved. During the Revolution of 1821, it withstood the siege of Ibrahim, defended with great valour by monks and locals alike. It was last raided by the Nazis, who killed the monks.

The monastery holds a large number of treasures of untold historical and religious value, such as artefacts of the Revolution of 1821, a Byzantine banner depicting three Emperors, sigils, old books and even a cross with part of the Holy Cross; its most valuable treasure is the miraculous image of Panagia Megalospilaiotissa. The icon is painted by Apostle Luke and is said to be a gift to the ruler of Achaea called Theofilo, along with the Gospels and the Acts. The ruler passed the image on to his descendants, who hid it in the cave to protect it from the persecution that Christians were facing at that time.

The image was found centuries later by Agia Efrosyni. It is made in relief, its width three centimeters, and is made by mastic and wax. It bears painted and golden diagrams. The fires that burned the monastery have tarnished its surface. It depicts Mary holding the Child Jesus in her right hand while He touches His left hand on her own, and in His right holding the Gospel.

The monastery celebrates at these dates: 15th of August (Dormition of Mother of God), 14th of September (Exaltation of the Holy Cross) and 18th of October (Agios Endoksos, Apostle Luke, and founders Symeon, Theodore and Efrosyni). 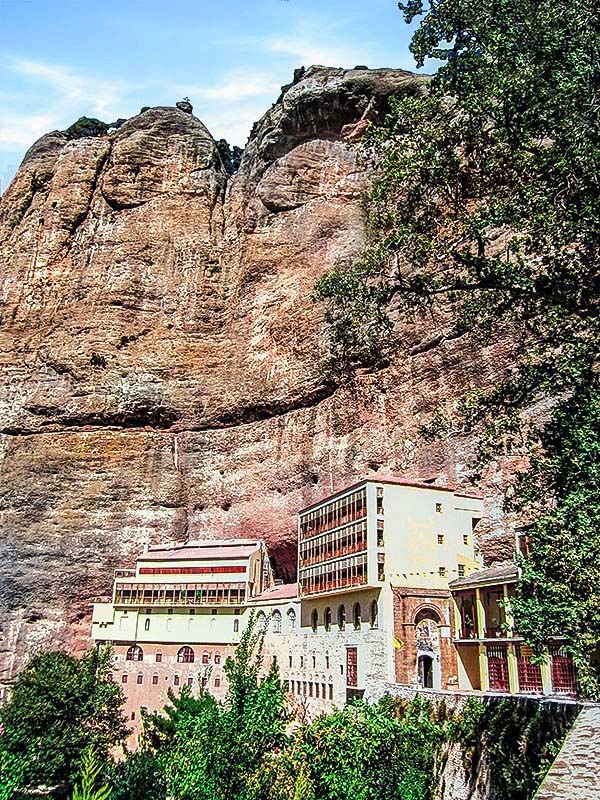