The beautiful convent of Osios Patapios is ideal to find your inner peace and contemplate the superb view of the Corinthian bay.

The convent of Osios Patapios is 7km from Loutraki and located in the sheer slope of mount Geraneia (700m) offering an incredible view to the Corinthian bay and the city of Loutraki. It was founded by the father Nektarios Marmarinos and it is known for its social and charity work. The compound is an extension of a 12th century secluded place for religious reasons; 150 steps lead the visitor to its entrance.

Entering the indoor court, there is the catholicon dedicated to the Dormition of Theotokos (Mother of God). The church, a domed basilica with single-light and double-light windows, has elaborated religious paintings and a wooden iconostasis of fine workmanship.

Northwest of the church, at the foot of a huge mountainous bulk, there was the secluded place of saint Patapios whose relics are kept in a reliquary covered with a frock. Saint Patapios’ relics were discovered by V. Protopapas, a craftsman, in 1904. The little church-cave is covered with byzantine religious paintings and its iconostasis is stone-built with two doors, marble pilasters for the Holy Doors and a lintel with schematic representations of a basilica from the late ancient Christianity period.

When the visitors of the convent leave, they take with them a piece of cotton imbued in oil from the saint’s vigil lamp and holy water from the spring near the cave as a protection. 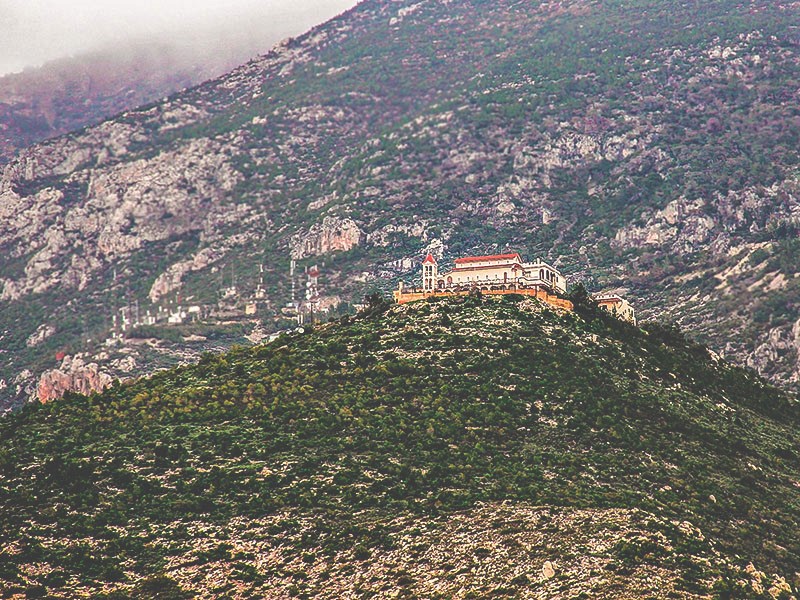