The Prodromos monastery is 39km from Tripolis and is one of the oldest monasteries in Peloponnese. Built in the 16th century, its date of establishment was defined in 1167, according to legend. Located on the left bank of Loussios river, this monastery clings precariously to sheer cliff face opposite the renowned Philosophos monastery. But, in 1838, along with 400 monasteries all over Greece, it was closed to reopen four years later.

The catholicon, a barrel-vaulted basilica, is carved into the rock. Its exterior is decorated with notable holy paintings of the 16th century, albeit seriously damaged. In the monastery you will find many old books and manuscripts of Kolokotronis (a fighter of the Greek War of Independence). On a mound a bit further from the monastery, there is the little church of Agios Athanasios. The one-aisled basilica of Agios Georgios and the hermitages of Agios Georgios, Agios Eleutherios, Taxiarhos Michael and the Metamoprhosi are nearby. The monastery was used as an infirmary and an ammunition depot during the Greek War of Independence. Many of its monks took part in the war. A path leads to the monastery through a lush landscape. There is also a guest house. The monastery celebrates on May 17 the Saint Athanassios Christianoupoleos. 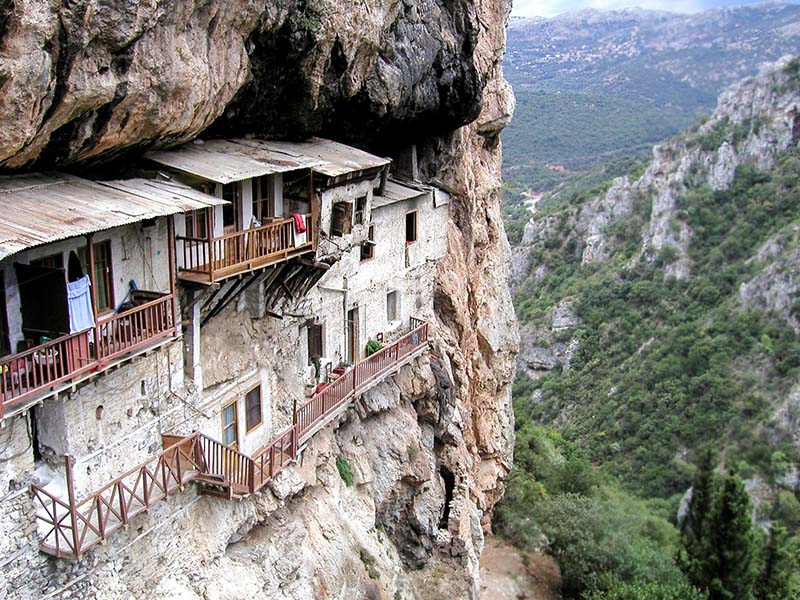