The ancient Epidaurus is one of the most emblematic archeological sites located in a particularly protected area northeast of Argolis. The most known archeological monument is the ancient theatre of Epidaurus, part of the Asclepeion, the sanctuary in honor of the God Asclepios.

The mythical king of Thessaly, Phlegyas, and his daughter, Koronis visited the land of Epidaurians for military reasons. Apollo, patron of Epidaurus, fell in love with Koronis and got her pregnant. She abandoned the newborn in mount Titthios, in shame for his illegitimacy. But, the baby survived drinking milk from a goat. Later, a shepherd found the infant and he knew that it was of divine descent as from his face emanated a strange glow. The infant was named Asclepius and Apollo confided him to the centaur Cheiron in mount Pelion. Asclepius became an excellent doctor who could cure any disease even death, thus provoking the rage of Pluto, the Ruler of the Underworld, who asked from Zeus to punish him. Zeus sent a thunderbolt and embedded Asclepius into the earth. Then, Apollo freed him and turned him into the constellation Ophiuchus (the serpent holder). However, his spirit returned to where he was born, in Epidaurus, so to honor him the Epidaurians built an Asclepeion, a sanctuary to cure the diseases.

It was built circa 340-330 BC west of mount Kynortios by the architect Polykleitos the Younger. Music, theater and poetry competitions were held in the premises. The theater has a koilon, an orchestra (a simple circular space) and a scenic building. It was constructed in two stages: the lower seating sections were built in the first phase, while in the mid-2nd century BC the theater was restored and the upper seating sections were added, thus, reaching a seating capacity of 13,000-14,000 people. So, the original theater had 34 rows extended by another 21 rows. The koilon was surrounded by retaining walls. The orchestra with a diameter of 20m, had a Thymele (an altar to Bacchus, patron of the theater). The scenic building, constructed with porous stones, consisted of a proskenion (in front of the scene), a two-storey skene (scene) and the paraskenia (a stone scene wall). Around the 2nd century BC, the back side of the ground floor room was closed and five accesses to the first floor were created so as the actors could play only in the logeion (a speaking place above the proskenion).

This theater is one of the best preserved ancient theaters and is internationally known for its acoustics. The slightest sigh or breath of actors is clearly heard to all spectators, regardless of their seating. The acoustic properties are the result of the advanced design by architect Polykleitos and of the theater’s position on mount Kynortios and the other hills of the region which together form a unique echo. The latter could be attributed to chance, because no other theater had ever the same acoustic properties.

The theater regained its past glory in 1955 with the Festival of Athens and Epidaurus. Every year theatrical works of classical antiquity are performed bringing the lights of the world on Epidaurus.

The Asclepeion comprised very important edifices, works by renowned architects and artists. The Doric temple of Asclepius was built circa 380-370 BC by the architect Theodotus. It was a peripteral temple with 6X12 Doric columns and two more at the entrance of the pronaos (a frontal porch). The inner Corinthian colonnade was pi-shaped. The temple’s interior contained the ivory and gold statue of Asclepius made by Thrasymides, a sculptor from Paros.

Behind the Asclepeion, Tholos, a circular building, was built by the architect Polykleitos the Younger circa 860 BC. This enigmatic and mysterious building is an architectural masterpiece with exquisite carved decoration. According to the legend, beneath the floor of the Tholos was a labyrinth where lived the sacred snakes of Asclepius.

A big altar for sacrifices and other rituals was next to the Sacred Well, a natural spring inextricably linked to the healing process.

Other important buildings were the Katagogeion Hotel, the biggest edifice of the Asclepeion complex for the accommodation of the visitors and the Enkoimeterion where patients slept overnight and awaited dreams where Asclepius would appear and offer cures.

The Stadium was another important construction where competitions were held in honor of Asclepius. Other important buildings were the Odeon and the Propylon, the main gate to the sanctuary.

The building E, as it was named by the archeologist Kavadias is one of the first sacred edifices in Epidaurus where the cult of Apollo and Asclepius was performed. In the center there was an altar for the sacrifices. Between the Building E and the Dining premises there is the sanctuary of Artemis, a small temple of the 4th century BC. It had 6 Doric columns and a pi-shaped inner Corinthian colonnade. To highlight the hunting aspect of the Goddess, the spouts of water were heads of wild boars and dogs.

In the museum of Ancient Epidaurus interesting artifacts from the sanctuary of Asclepius are displayed, dated from the archaic till the roman times. Statues, a replica of Asclepius, reliefs, medical tools, parts of edifices and, of course, parts of the Tholos.

The last weekend of September every year (European Heritage Days)

Every first Sunday of month from November 1 till March 31 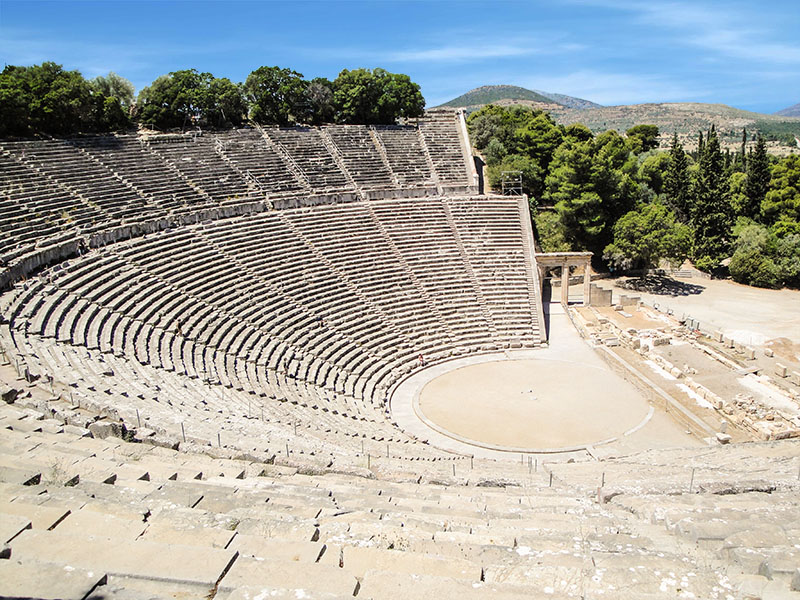