Ancient Nemea was one of the most important sanctuaries in ancient Greece where used to be held the Panhellenic sport games. Though Nemea was inhabited by a few priests and those who were taking care of the premises, every year only for a few days it accommodated thousands of pilgrims who came to worship the Gods. Ancient Nemea is in a valley at the foot of the Arcadian mountains, and it took its name from the Greek verb “nemo” (meaning, grazing) due to the cattle-breeders that lived in the region.

There are two versions which led to the creation of the sanctuary in question. In the first version, Hercules, the son of Zeus, after killing the Lion of Nemea, built a shrine to honour his father. In the second version, the most known, the king of Nemea and priest of Zeus, Lycurgus, and his wife Eurydice had a son, Opheltes. But, as Pythia (the Oracle of Delphi) said in a prophecy, the baby was not to touch the ground until he had learned to walk. One day, his nursemaid Hypsipyle as she was holding Opheltes, she met a group of travelers who came and ask for water. She left the baby on the ground in a bed of wild celery, so as to give the travelers some water. When she turned her head, she saw a snake biting Opheltes who died. This incident was considered a bad omen and the baby was named Archemoros (meaning, “forerunner of death”). To appease the Gods, they decided to hold sport games in Nemea, but the judges had to wear black robes as a sign of mourning.

In Nemea there was a shrine of worship as early as the Neolithic period (6500-3000 B.C.) and the vases discovered in the wider region corroborate this view. Nemea flourished around the 6th century with the holding of sport events and the building of sanctuaries and athletic infrastructure. The last quarter of the 5th century B.C. an armed conflict seemed to have hit Nemea, which was devastated and the sport events moved to Argos. The second flourishing period was in 330 B.C. when the sport events moved back to Nemea, so new buildings were constructed as well as old ones were renovated. In 145 B.C., one year after the region was occupied by the Romans, the sport events move finally to Argos and Nemea was deserted again. Around the 4th century B.C. the outlook of ancient Nemea’s shrine has changed dramatically, as farmers and shepherds caused much irreparable damage to the buildings because they used the ground for cultivation. In the 5th century B.C. a late ancient Christianity basilica was built in the ruins of the athletes’ quarters, thus occupying 1/3 of the premises. In 540 B.C. the Nemea valley underwent a morphological change, which led to the drying out of the water resources and the region was abandoned once again.

The first archeological excavations were carried out in 1766 by the Society of Dilettanti. Equally important discoveries were made by the archeological mission of the American School of Classical Studies from 1924 to 1926. They excavated the shrine and the Tsougiza hill. The Berkeley University of California also carried out excavations in the region. Today, the excavations are still ongoing but, they are coupled with maintenance and restoration projects.

Temple of Zeus: The first temple of Nemean Zeus was built around the 6th century B.C. when the Nemean games began to take place. Its dimensions were 10.10X36.30m approximatively. It had no peristyle, but there were two columns on its entrance on the east side. The façade was distyle and mortar was used to install big square tiles on the floor. This flooring technique is called Corinthian. After its destruction in the 4th century B.C., the temple was rebuilt on the foundations of the first one. So, a peripteros temple (new dimensions 20.09X42.55m) was built surrounded by a portico with columns (6X12X7,49m), that is, a colonnade (pteron) on all four sides of the cella (naos). Six columns on either side, four in front and back. In the adyton (the Holy of Holies) there was a 2m krypt of unknown purposes. The roof consisted of wooden beams on which clay tiles were placed. Finally, the door consisted of two wooden foils and its width is 4.16m.

Altar of Zeus: East of the temple’s entrance there was a long stone altar for the sacrifices in honour of Zeus, dated from the 5th century B.C. This altar was restored in the 4th century B.C. and was extended to the west, reaching 41m in length. It consisted of small height oblong limestones and on its south end there are visible tracks from the basis of two statues.

Shrine of Opheltes: Southwest of the temple, an oblong mound was discovered which protected the sacred area from floods. South of this mound a rectangular construction (1.40X3.15m) was found, dated from the second quarter of the 6th century B.C., built with raw stones. Three more altars were also discovered. The Shrine of Opheltes was restored at the beginning of the 3rd century B.C. by placing a series of yellowish limestones covering an area of 850m2.

Stadium of Nemea:  It was constructed circa 330-320 B.C., southeast of the temple of Zeus, and it was carved into a natural depression between the two hills around the sanctuary. The track (178X23.52m) was constructed in the big depression. East of the track, there was a wooden grand-stand for the judges and around it a water pipe that was used to moisten the surface of the track. A tunnel (36.35mX2.06mX2.48m) led to the locker-room, which was a plain rectangular building (13.40X16.40m) with an indoor court. The seating capacity of the stadium is estimated at 30,000. 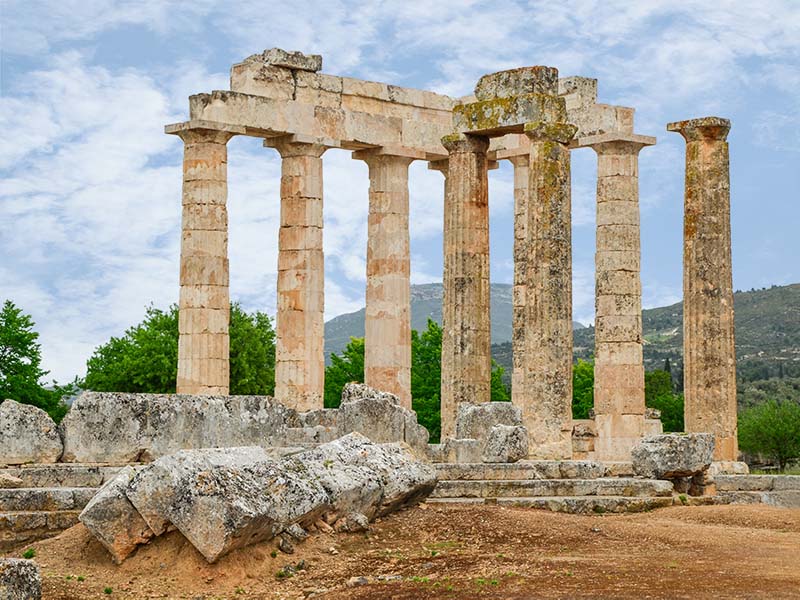 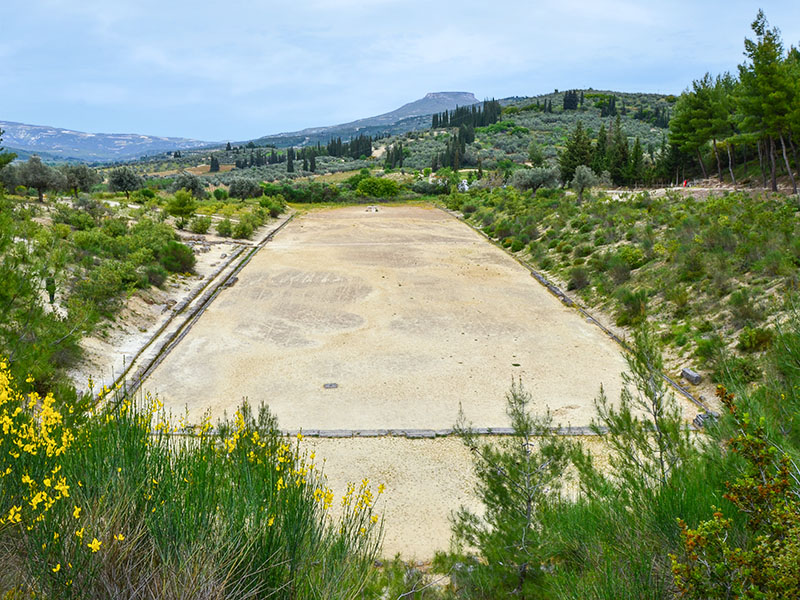 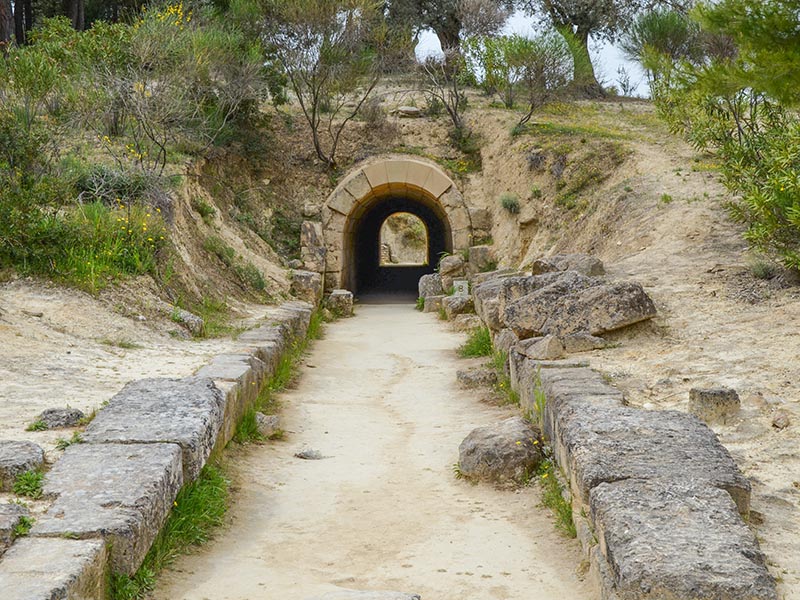 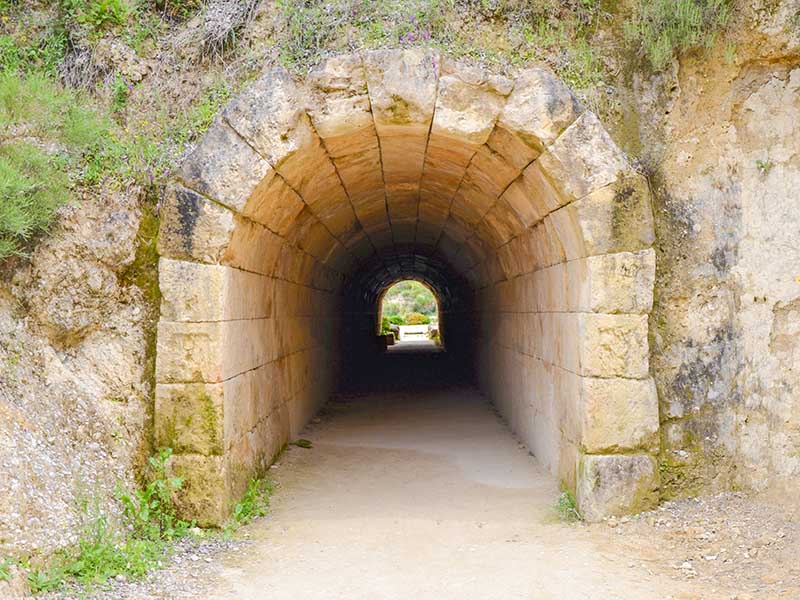 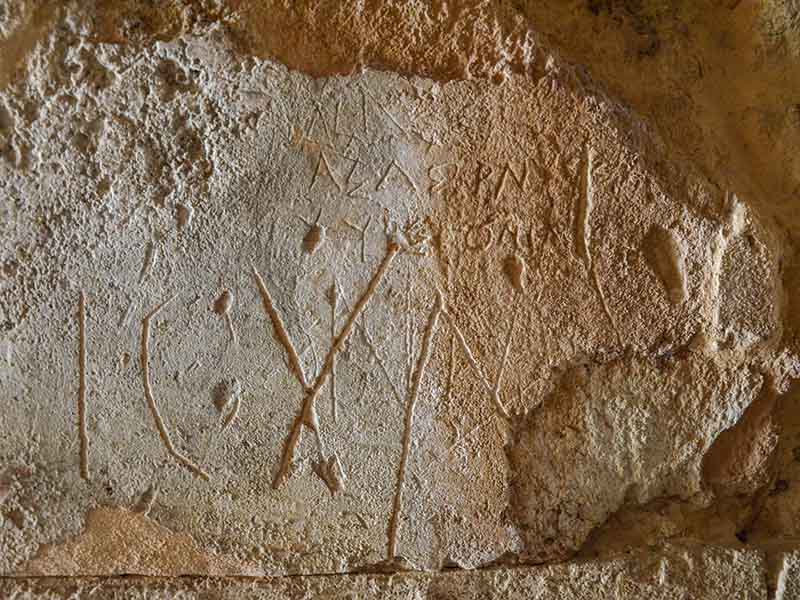