The story of the canal begins from the antiquity in ancient Corinth, which due to its geographical position became an important commercial, naval and cultural hub. To the economic thriving of the city contributed the two harbours: Kenchreai on Saronic Gulf and Lechaion on Corinthian Gulf.

From the 7th century BC the Corinthians tried to solve a major problem in navigation, which was the crossing of ships from Aegean Sea to Ionian Sea and vice versa by avoiding the time consuming and dangerous circumnavigation of Peloponnese. The first who offered a solution to this problem was Periander, the tyrant of Corinth, who constructed the diolkos in the 6th century BC. Diolkos was a stone track 3.5m wide with carved grooves. On these rolled the wheels of a platform which carried the ship. They used ropes pulled by slaves. This construction operated for several centuries and is considered to be the first means of transportation in rails.

However, the bridging of the two harbours in Corinth continued to puzzle many people, as the muscle power provided by slaves and animals caused many problems in the transportation of ships. The following centuries many powerful leaders such as Demetrius Poliorcetes, Julius Caesar, Nero, Herodes Atticus tried to realize the vision of Periander, but in vain. The most serious effort was made by Nero in 67 AD, when he sent to Corinth 6,000 slaves from Judea to enlarge the canal. They started digging from both sides, but the project was abandoned after the assassination of Nero.

After the independence of the Greek state, the government realized how important it was to carry out such a project and was engaged in the opening of the canal. Things started to change in 1869 with the opening of Suez Canal, a colossal work which had a tremendous impact on world trade, and made the opening of the Corinth Canal more crucial than ever. Ships would avoid navigation around Peloponnese and transportation cost would be reduced. The Zaimi government voted the law to open the canal in Corinth and in 1881 commissioned the Hungarian architect Istvan Turr to proceed with the undertaking and to operate it for the next 99 years.

The works began the following year and even the royal family attended the inauguration ceremony. The plan of Nero was chosen, that is a simple channel measuring 6,346m long by 24.6 wide at the top and 21.3m wide at the bottom. The depth varies from 7.5m to 8m. Two submersible bridges were installed at sea level at each end of the canal.

For the opening of the canal worked 2,500 persons and was used state-of-the-art technology to carry out this project. The work was completed finally in 1893 by a Greek company, funded by Andreas Syggros, as Turr’s company went bankrupt. In 1993 the first ship crossed the canal and a bridge as well as a railway connected Peloponnese to the rest of Greece. Every year about 15,000 ships of different nationalities pass through the canal, thus, making it an important communication hub in the Mediterranean Sea. 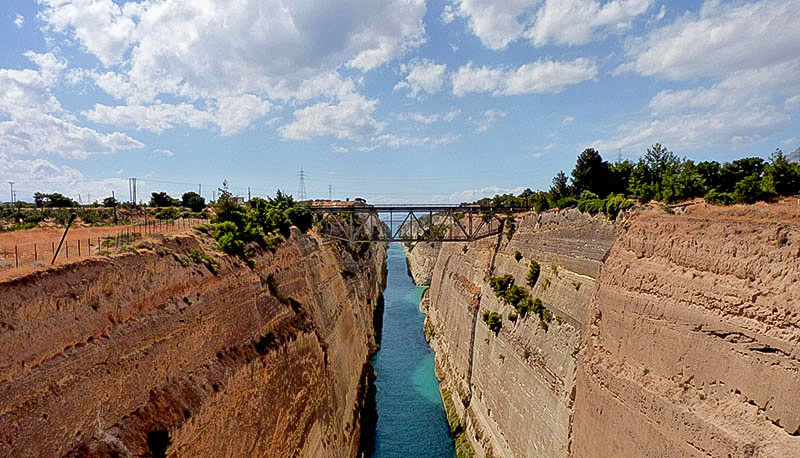