The archeological site of Mystras belongs to the municipality of Sparta in the prefecture of Laconia. It is 6km northwest of Sparta at an altitude of 300m. Since 1989 the fortified town was declared a UNESCO World Heritage site.

The story of Mystras begins from the Fall of Constantinople by the Crusaders in 1204 which resulted in the creation of numerous Latin principalities within Byzantine empire’s land and in particular, the principality of Achaea established in Peloponnese by William II Villehardouin. In 1249, he built on the top of Myzithras hill (due to its similarity with the Greek cheese myzithra) east of Taygetus the fortress of Myzithras, hence the name Mystras by corruption of the language.

Mystras was for a decade in the hands of Franks. Three years after the battle of Pelagonia (1259), it devolved to the Byzantines as ransom for Prince William II, who had been captured in battle. In 1262, Mystras became the headquarters of the General Sevastokratoras. Thanks to its crucial strategical position it was inhabited quickly and became an urban center of the region, as there came to live about 20.000 people, according to records. Even more reinforced, the fortress was the headquarters of the Byzantines since 1289. Sixty years later, it became the capital of the Despotate of the Morea and the first Despot was Manuel Kantakouzenos. The Palaiologoi were the last dynasty of Mystras because in 1453, after the Fall of Constantinople, it was conquered by the Turks.

Mystras was a great silk-producing center and the capital of the region during the Palaiologoi dynasty. With the exception of the Venetian Rule II (1687-1715), Mystras remained mostly under the control of the Turks until its destruction by the soldiers of Ibrahim Pacha in 1825. After the establishment of the Hellenic Kingdom by King Otto and his plans to build a new Sparta, the majority of the population in Mystras abandoned the area. In the beginning of the 20th century, the site was declared a byzantine monument and in 1953, the land was expropriated by the government, forcing the last remaining inhabitants to abandon Mystras forever.

During the Late Byzantine period, Mystras was a major cultural and art center. The byzantine style had influenced not only the architecture of palaces, churches and the mansions of the fortified town, but also the paintings and the carved ornament of the churches. Eminent philosophers and scholars, such as Gemistus Pletho, lived in Mystras lending more splendor to the last stronghold of hellenicity and orthodoxy before the Fall of Byzantium.

Today, major restoration works have been undertaken and now Mystras is an archeological site of great importance for the scholars of the Late Byzantine art and architecture.

The fortified town of Mystras has two main gates: Monemvasia’s gate and Nauplia’s gate, dividing the town in Chora or Ano Poli (Upper town) and Mesohora or Kato Poli (Lower town). Chora was the aristocratic district with the Despot’s Palace and Saint-Sophia, whereas Kato Poli was created much later with Metropolis, Brontochion monastery, Evangelistria, Peribleptos, Pantanassa. The Frank fortress crowns the hill-top. The rest of its fortifications and the towers were built by the Byzantines.

It is the oldest church in Mystras dedicated to Agios Dimitrios. It was the cathedral of the fortified town and the See of Lakonia till the first years after its liberation from the Turks. Built around 1270, the church was restored a few years later to acquire its final form in the beginning of the 15th century. It belongs to the Mystra type, because it combines the style of a three-aisled basilica on the ground floor with the cross-inscribed five-domed style in the gallery. The iconostasis and its carved ornament are exquisite, as is the flagstone underneath the dome depicting the double headed eagle. The frescoes, dating from the 13th and the 15th centuries, are Macedonian art. Intense colours, movement, perspective, many expressive faces, garments with multiple draperies, etc. The emperor of the Byzantium, Constantine XI Palaiologos, was crowned king in the Metropolis in 1449. Next to the cathedral there are many edifices and a court encircled with columns in classical style. On the right there is a stone fountain with the double headed eagle. Near the entrance of the wall surrounding the compound the Metropolitan bishop Ananias was murdered by the Turks in 1760, while he was trying to save the believers and the church.

Next to the cathedral there is a museum where sacred relics, reliefs, icons, pieces of frescoes and jewelry are displayed on the first floor.

Evangelistria, an inscribed-domed church, is located in the Middle city and was probably built in the beginning of the 15th century. Its frescoes are not in good condition, even though their quality in art is exquisite.

This monastery was built in 1296 by Pachomius, a powerful abbot with strong connections to the Constantinople, thus ensuring him many grants and of course the support of the Patriarch. The chryssovoula (official documents bearing a gold seal) adorning the church of Aphentikon are proofs of the fact aforementioned.

The church of Saint-Theodores was the monastery’s catholicon and was built in the end of the 13th century by the monks Pachomius and Daniel. It was dedicated to two soldier-saints and it is the only church in Mystras with its octagonal. Its frescos are from the same period.

The church of the Hodegetria or Aphentikon was the new catholicon of the monastery and was built by Pachomius around 1310. It was named after a monastery in Constantinople and, indeed, is one of the most beautiful and important churches of Mystras. It is a three-aisled basilica with five domes, a gallery and a bell-tower. The sumptuous interior decoration was the work of notable artists from Constantinople. The frescoes are of Macedonian art, dating from the beginning of the 14th century. The ones in the chapel where Pachomius was buried are not to be missed, as well as the painting of Theodore I Palaiologos depicting him as a Despot and as a monk.

This church is located in the Despot’s palace and the square in the Upper city and it is presumed to have been the catholicon of the patriarchal monastery of Zoodotis Christos (Christ). It was built by the first Despot of the Morea, Manuel Kantakouzenos, circa 14th century. It is a cross-inscribed church with dome. This is also the burial place of Manuel and of Theodora Tocco, the first wife of Constantinos Palaiologos. The monogram of Manuel Kantakouzenos and the double headed eagle are apparent in the colonettes. The frescoes were painted by eminent artists of Constantinople in the mid-14th century.

It is the catholicon of the monastery dedicated to Panagia (Holy Mother of God) built in the mid-14th century by the Despot Manuel Kantakouzenos and his wife Isabella of Lusignan (Princess Isabeau). Next to the church there is a defense tower. The entrance of the monastery is adorned with a walled up relief of the escutcheon of its two founders and the circular monogram of the Peribleptos monastery. A fresco depicting a couple praying while holding the effigy of the church is thought to be representing the founders. The iconographic program (the paintings decorating a church) is a work of four different artists. The wonderful paintings in the Peribleptos monastery are a reference to the exquisite frescoes of the churches in Constantinople. They are of Macedonian art and in pristine condition. Rich compositions, bright colours, vigorous movements, passion, intense feelings, vivacity and absolute harmony are the basic characteristics of the icons in the Peribleptos monastery.

Pantanassa is the catholicon of the Pantanassa monastery founded in 1428 by the chief minister of the Despotate of the Morea, John Frankopoulos. It is a cross-inscribed church with an excellent carved decoration. The frescoes are in good condition and perhaps, they may be the most important example of painting in Mystras just before its Fall. Eclecticism, originality, ingenuity and rich imagination are the main characteristics of these paintings, works of eminent artists from Constantinople.

The Despot’s Palace and the square

It was the seat and the house of the Despot of Mystras and his family. In the compound there are parts built by the Franks and additions made by Manuel Kantakouzenos (14th century) and the Palaiologoi (15th century) so as to cover the needs of the government in the fortified town. 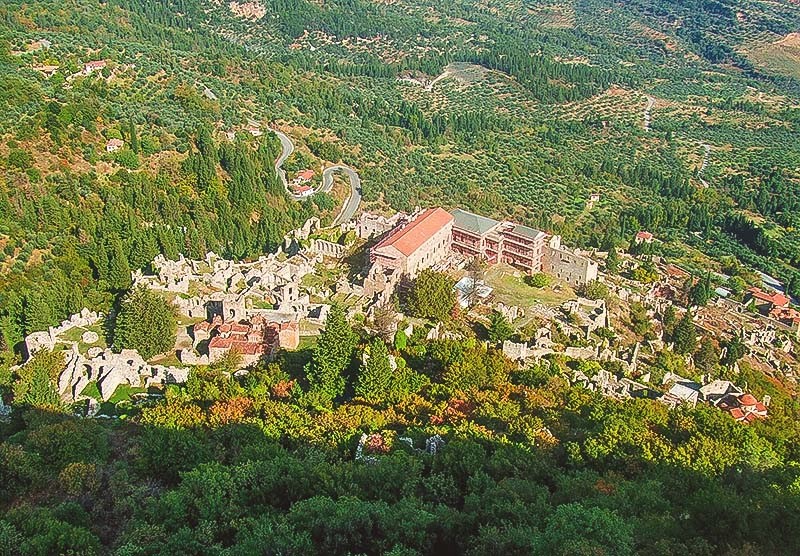 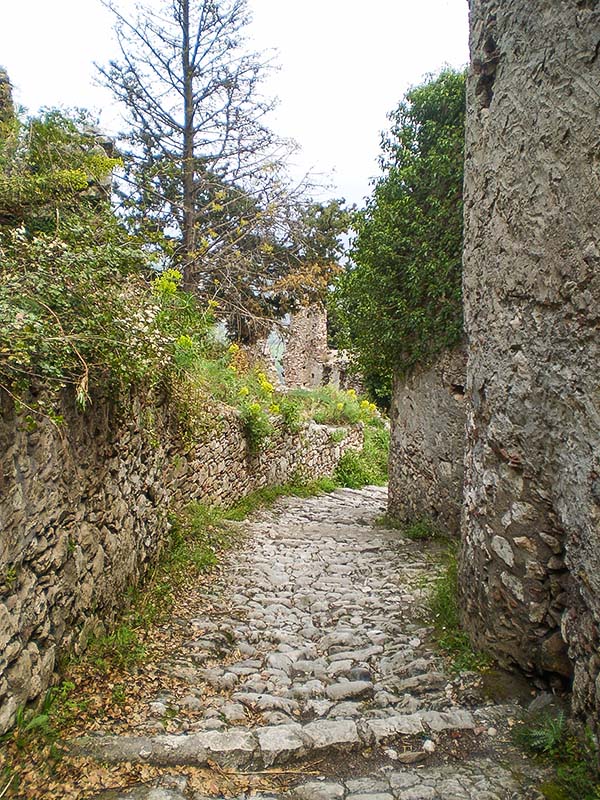 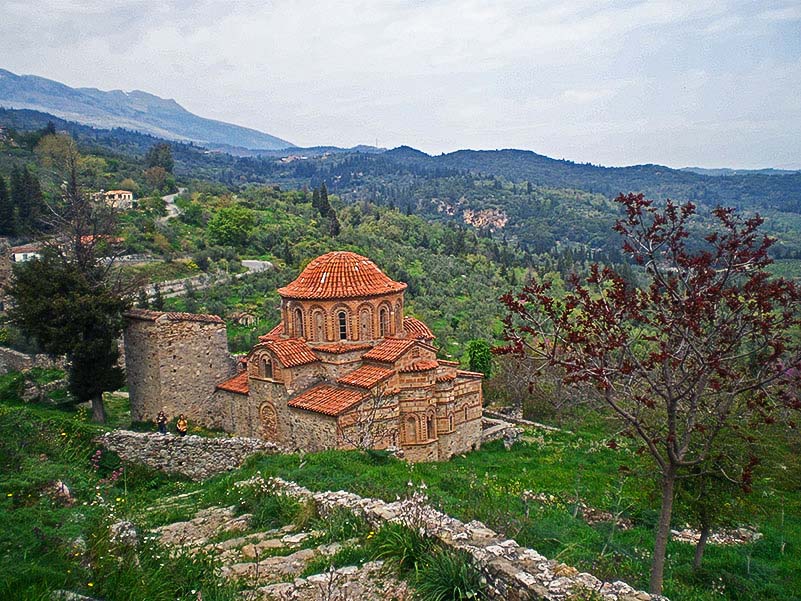 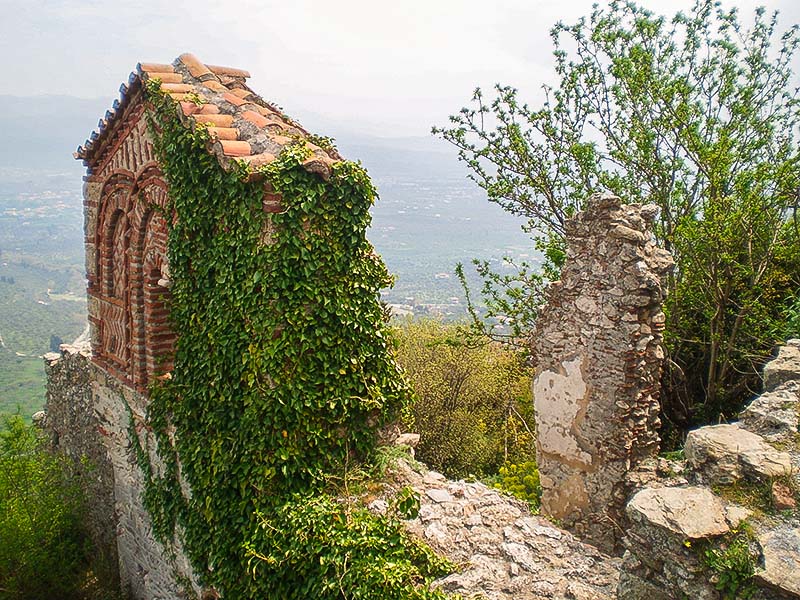 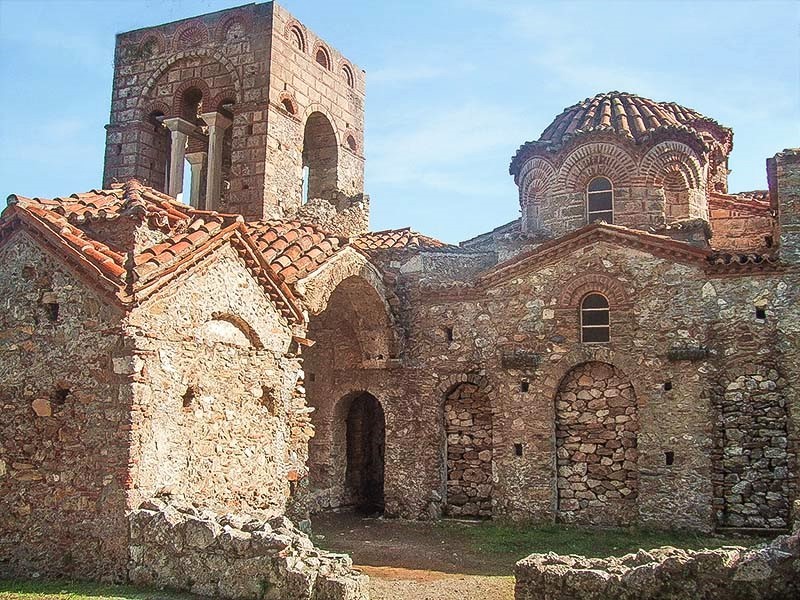 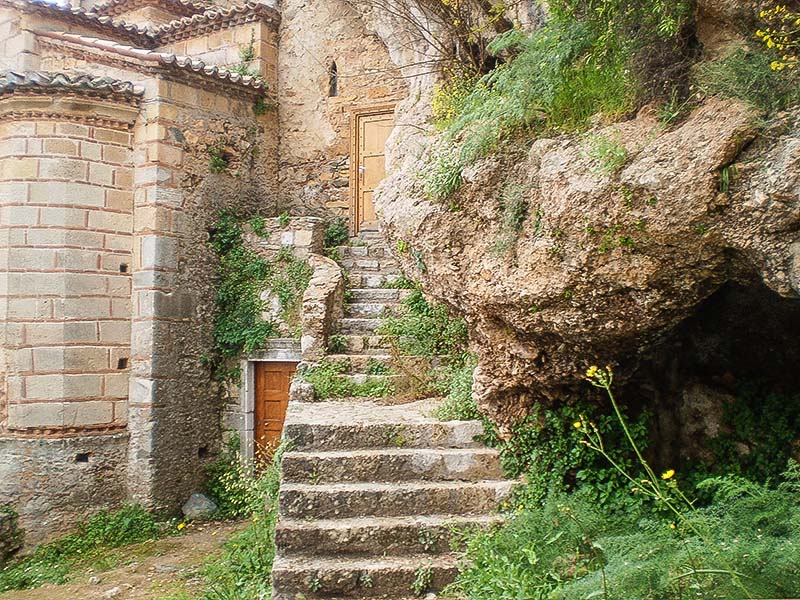 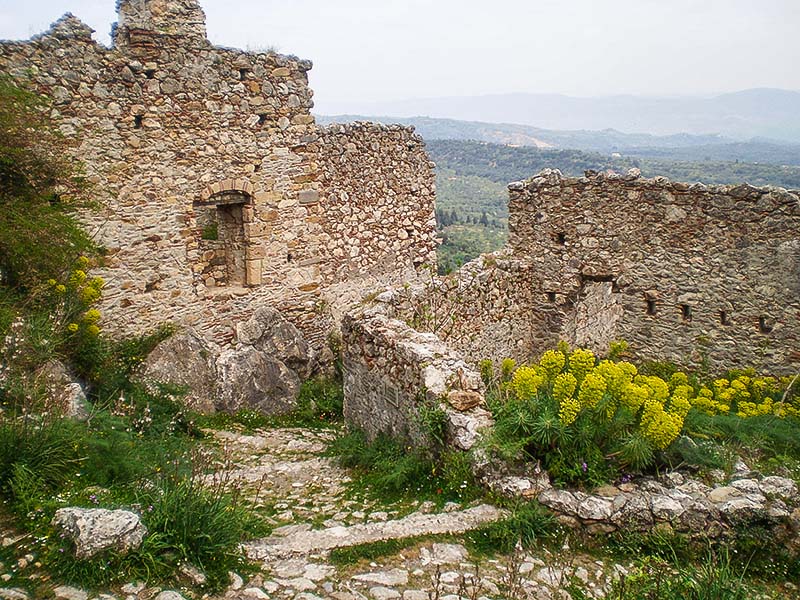 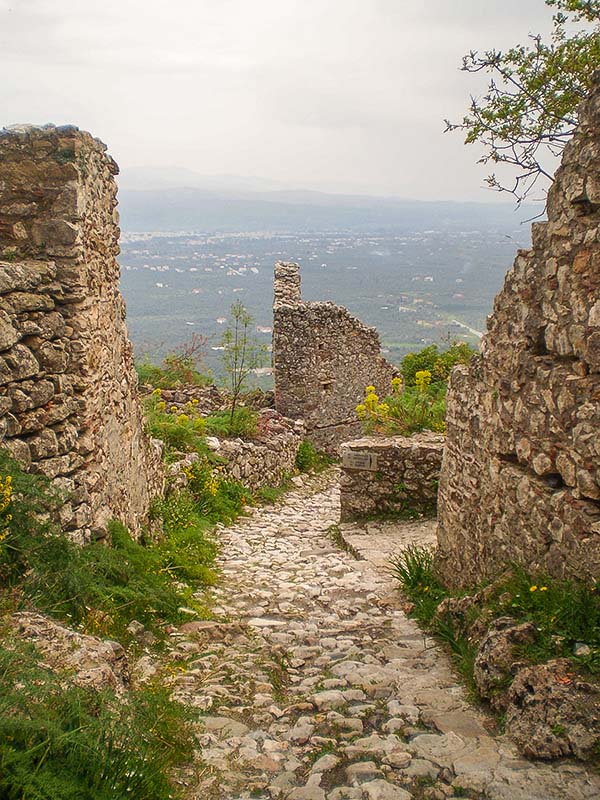 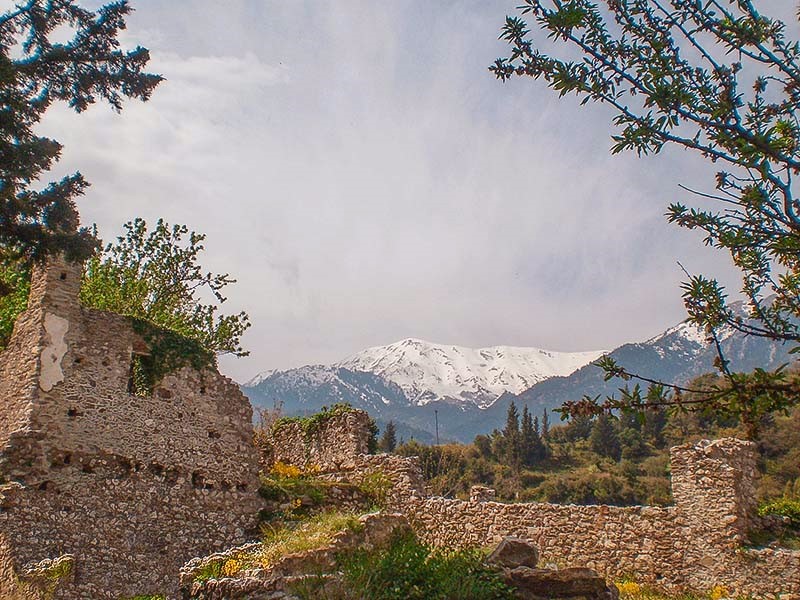 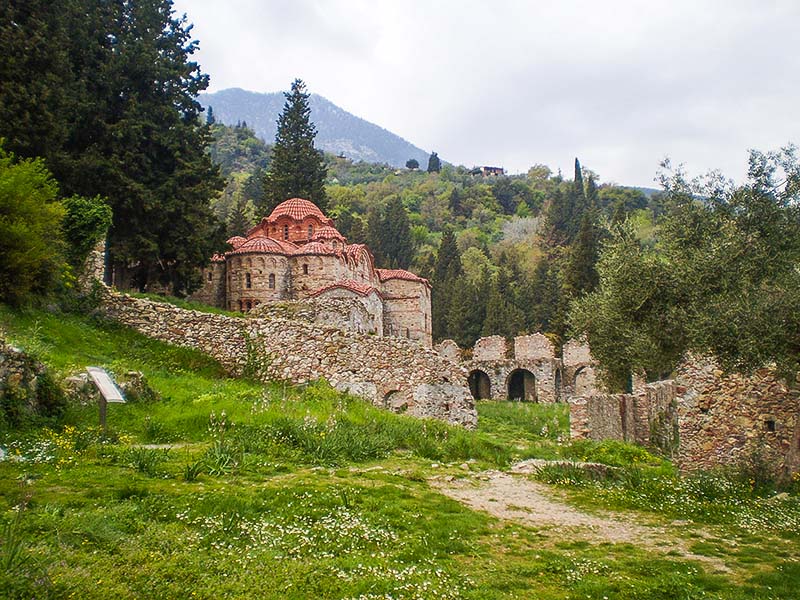 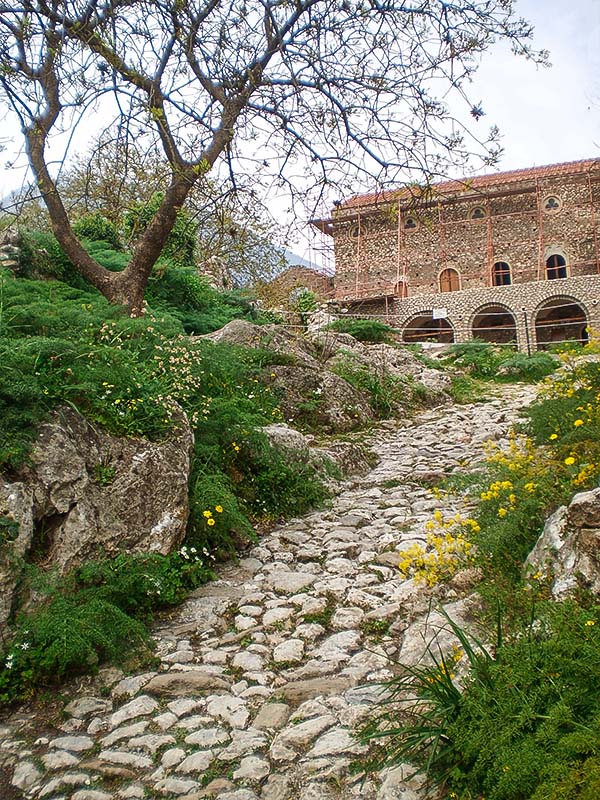 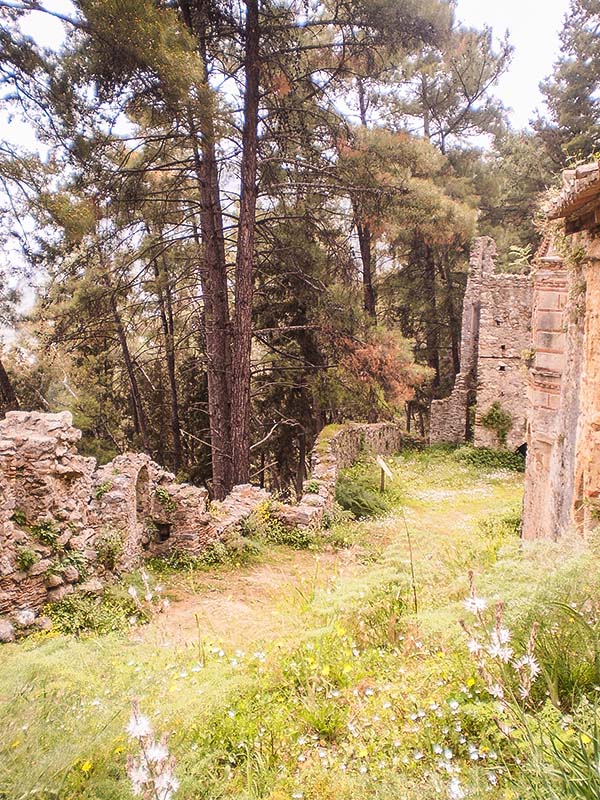 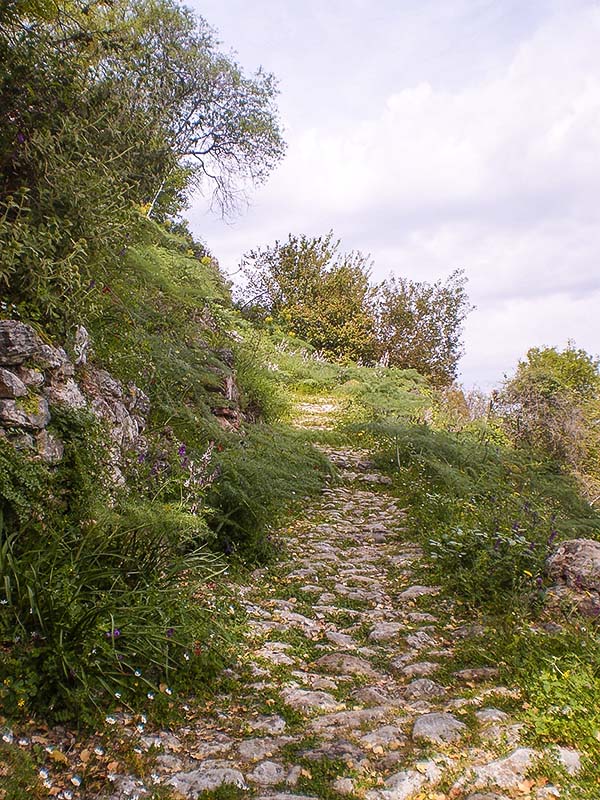 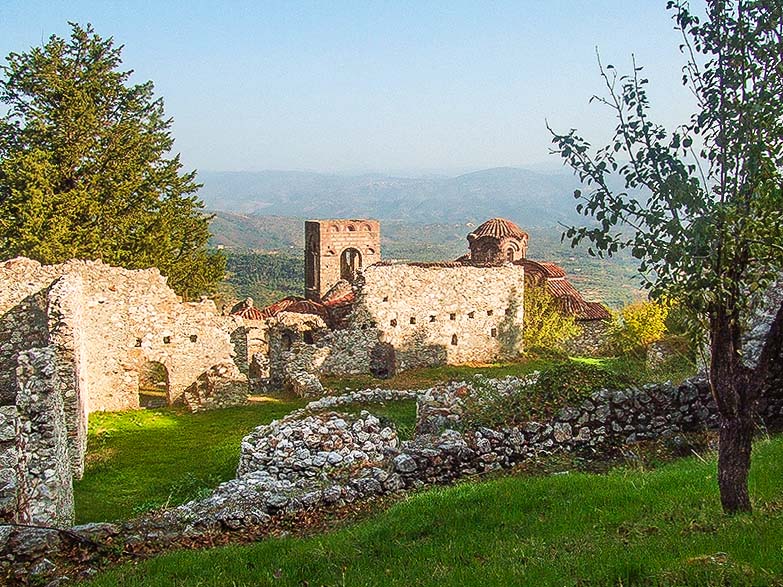 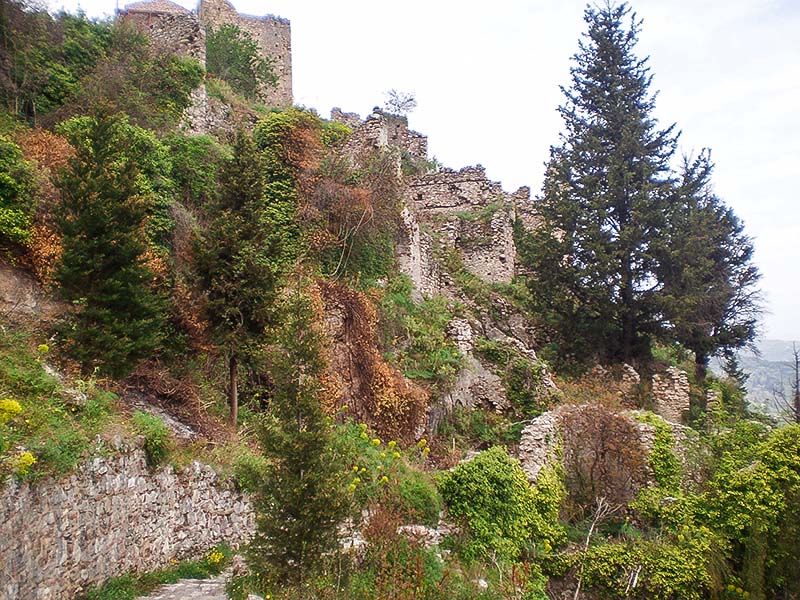